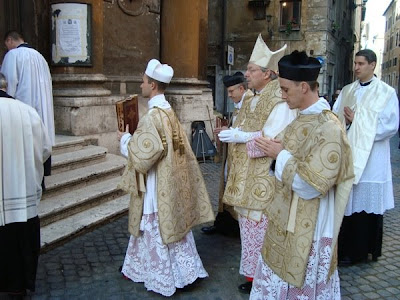 Fr Withoos reprises his role as a deacon at a cardinal`s Mass! See the NLM here for a full report of Cardinal Pell`s Mass yesterday at Ss Trinita in Rome. It appears to have been a joyful occasion. I listened to Fr`s podcast for Missa Cantata for the second Sunday of Advent as we had the monthly Longbenton Mass on Sunday night, and found it useful as I don`t normally use the tones used there so on the strength of the podcast I used the other tones.
For anyone who doesn`t know Fr Withoos, he lived in the diocese of Hexham and Newcastle for two years while pursuing a PhD at Durham university. He made many friends while here amongst priests and laity. He said Mass on a number of occasions at Forest Hall.

Posted by Fr Michael Brown at 9:27 am