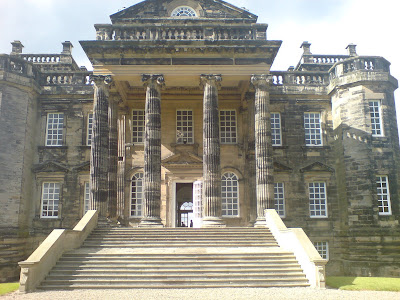 My interest in Seaton Delaval Hall was first aroused quite a few years ago when listening to a programme about baroque architecture in England which said that it was one of the most important examples. England is not exactly awash with the baroque and so I made a mental note pay a visit as it was just across the river in North Tyneside. In those pre-Forest Hall days North Tyneside was an unknown country to me and I no real idea where Seaton Delaval was. However last year on yet another dull Bank Holiday I decided to track it down. I`d heard that the negative side of the hall was that it had been engulfed in a great fire in 1823 but wasn`t sure how bad the damage had been and how much had been restored. A roof was put back on the 1860`s but apart from one room the rest remains as it was after the fire. I wish I had some pictures of the interior but here are some of the exterior. This link has many more pictures, including the interior. The last shows how Vanbrugh based the design of the house on Claude Lorrain`s 'The Enchanted Castle' or more properly `Landscape with Psyche outside the Palace of Cupid`. I have always been a fan of Claude Lorrain. The view from the north entrance to the North Sea is also meant to put one in mind of one of his harbour pictures. 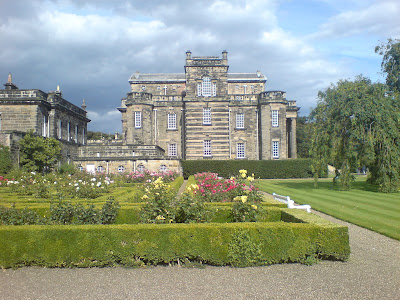 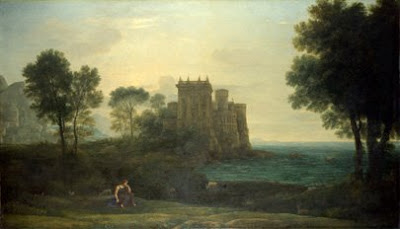 The National Trust is now trying to buy it since the death of Lord Hastings (who lived in one of the two wings which had not been destroyed in the fire). If it fails it will be bought privately. If you are ever in the area it is well worth a visit but only open on Wednesday, Sunday and Bank Holiday afternoons.

I'd only heard of Seaton Delaval Hall recently, as a few weeks ago The Journal were promoting the National Trust campaign to save it (they were calling it 'The People's Palace'). Suggestions for what to do with the hall if the NT are able to buy it included turning it into an arts centre, a heritage centre... or a 'health and wellbeing' centre.

Will have to try and visit the place while it's still in a state of elegant decay, although the limited opening times are quite prohibitive.

Madame E, an arts centre could be ok or even a heritage centre. Was there no mention of just making it another stately home type of attraction?

That probably comes under the option 'other'... other suggestions were using it as a centre for education, or having a focus on the gardens, or as a place for weddings and conferences. I think there are going to be public consultation meetings over the coming months.