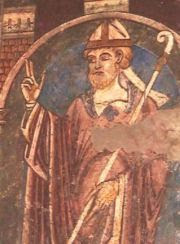 Today is the feast of our diocesan patron, St Cuthbert.

Today at Mass I spoke about Cuthbert being a man who had to accept what he would not naturally choose. He loved the Celtic traditions but accepted the decision of the Synod of Whitby to introduce the Roman method of calculating the date of Easter and the Roman tonsure. He had been among a group of monks who had left the monastery at Ripon about 661 to return to Melrose rather than accept the Roman ways. Later when he was sent to Lindisfarne Bede tells us:

"There were some brethren in the monastery who preferred their ancient customs to the new regular discipline. But he got the better of these by his patience and modest virtues, and by daily practice at length brought them to the better system which he had in view. Moreover, in his discussions with the brethren, when he was fatigued by the bitter taunts of those who opposed him, he would rise from his seat with a placid look, and dismiss the meeting until the following day, when, as if he had suffered no repulse, he would use the same exhortations as before, until he converted them, as I have said before, to his own views. For his patience was most exemplary, and in enduring the opposition which was heaped equally upon his mind and body he was most resolute, and, amid the asperities which he encountered, he always exhibited such placidity of countenance, as made it evident to all that his outward vexations were compensated for by the internal consolations of the Holy Spirit."

I can imagine in the 1970`s and even later Cuthbert would be held up as an example for those who loved the Church but found the liturgical changes too hard to bear, as a man who overcame his love for the old ways in favour of the magisterium and the greater good of the Church. Now in the 2000`s it seems that with Sacramentum Caritatis the picture has changed somewhat as the request that the faithful be familiar with their parts of the Mass in Latin so as to be able to participate in Masses at international gatherings could mean that those who love the Israeli, or even the Geordie, Mass might be asked to lay aside their natural preferences to learn how to sing the odd Kyrie, Sanctus, or Agnus Dei.

Church discipline can be hard for any of us to bear. Hence, the name, “discipline.” Yet it is the Magisterium that is the Mater et Magistra. Yes, there are times when we may not understand a discipline, thinking certain disciplines to be plain wrong, out of touch with the mission of the Church (i.e. altar girls), but such thing can change, Deo gratias, as they are disciplines. Perhaps bad disciplines as such, in my opinion, are allowed to make us humble, to return to praying for the Church.

On the other hand, good disciplines, I believe, are imposed to point us to deeper realities, dogmas, saving truths that lead us to God. So, disciplines are certainly very important. May we all pray for the leaders of the Church to have the wisdom to impose good disciplines upon the Church, leading the faithful to grasp the richness, the fullness of the Truth of our Catholic Faith!