I`m sorry this blog has been rather quiet of late but I`ve been away on holiday recovering from the Christmas season. I spent a week in Puerto de la Cruz in Tenerife with Fr Charles Briggs 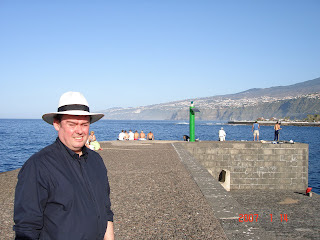 (seen here on the harbour wall) of Chislehurst. Neither of us had ever been there before but I heard the weather can be very good even in January and I reckoned that if the Spanish had been there since the fifteenth century there must be some churches and buildings worth a look. Another attraction is the annual musical festival in Santa Cruz in the new and exciting auditorium which a friend had been to last year but in the event it proved too difficult to get there.
Apart from food and sun there were indeed some ecclesiastical treats. Last Saturday we went to the Mt Teide national park. Any readers who are unaware of the landscape (as I was) of this area are missing something quite extraordinary. I`m sure it`s a geologist`s dream. Suffice to say that the landscape is sufficiently striking for it to have been used in the films `Planet of the Apes` and `Star Wars`. I later discovered that we were very close to an even more extraordinary happening as the episcopal vicar for Newcastle, Fr Jim O`Keefe, was on holiday at the same time and we missed him by a day at Mt Teide!

On the way back down from Mt Teide we took a circular route which took us to the town of Garachico. This was a great find. The town itself had a beautiful square with a large church of St Anne on one side and a former Franciscan house and church on the other. The church of St Anne (seen here) 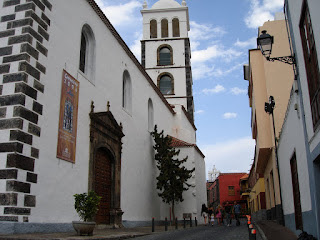 appeared to be closed but it did advertise a museum of sacred art. We went in and found large numbers of seventeenth and eighteenth century high Mass sets (strangely referred to as `triplets`) on display as well as other liturgical items such as missals and chalices. We were then let into the church which instead of the usual Spanish style of a large reredos with statues of saints had a retro choir, behind the high altar. We saw the same arrangement later in the main church on Orotava.

At Mass on Sunday in the main church at Puerto de la Cruz, the main celebrant was a visiting priest from the Birmingham diocese. He endeared himself when after the organ had intoned the chorus of the Battle Hymn of the Republic as a substitue for the Gloria, he then led us in reciting the Gloria: I`ve often wanted to do that in similar situations such as after the `Peruvian Gloria`. The sermon, on the marriage feast of Cana, was excellent. The theme was `Do whatever He tells you` and Father spoke of how we should give our whole lives to Christ from waking to sleeping and that our goal should be to do His will. It was so well-presented, coherent, interesting and engaging that Fr Briggs suspected he was an Anglican convert. On getting home we found Fr Briggs was correct!

I got back to find that nothing much had happened in the universal Church.
Posted by Fr Michael Brown at 11:45 am

I`m sure that is what it meant but I`d never seen the term before. I can`t remember what they called a high Mass set with a cope!.

I was getting very confused about the harbour wall of Chislehurst until I reread the post! ;-)

It was a great joy to be able to sing for your Mass on Holy Innocents' Day, Father. Best wishes.

Hi are you the Fr Brown who was deacon at St Marys many years ago?

That is St Marys in Sunderland I should have said

Sorry about the confusion, Ben.I`m glad you could make it to sing. I hope we`ll have more sung Masses.