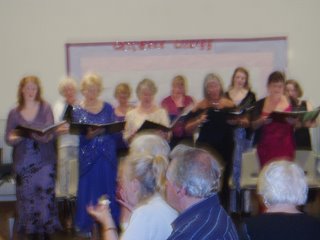 On Saturday night to celebrate our patronal feast we had a concert by the New Ormston Singers. I had thought of having some kind of parish celebration quite a while ago. My first idea had been to involve the parish youth group which while thriving does not have an explicitly Catholic focus. I suggested to the chairman of the parish council that the youth group present a dramatisation of the battle of Lepanto ( cf. previous post), with vague images of childhood visits to Peasholme Park in Scarborough and its naval battle going through my head and also a thought that we could include the Chesterton poem `Lepanto`. However this all began to look rather difficult despite the agreement of our parish council chair (who also runs the youth group). So we decided to have a concert. I rang a contact in the New Ormston Singers without knowing anything about them. What a wonderful night they gave us. They are a band of keen singers who performed a selection of light classics and songs from the shows. The music ranged from West Side Story to La ci darem la mano from Don Giovanni and Laudamus Te from Mozart`s Mass in C to a favourite of mine, John Ireland`s Sea Fever, and Vilja from the Merry Widow. The accompanist struggled manfully with our small electric keyboard. Everyone seemed to enjoy the music and the food ( organised by the social committee). I hope we will invite the New Ormston Singers back again before too long. They explained that I had asked for a programme of light music but that they can do more serious stuff. Maybe I should ask for some Wagner next time!
Posted by Fr Michael Brown at 10:57 pm