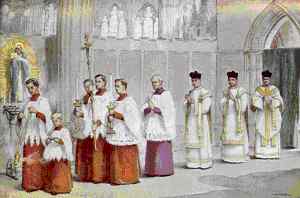 Yesterday in the Times there was an article which claims that the Pope is about to make access to the traditional Latin Mass in its 1962 form far more accessible in the Church than has been the case hitherto. The article traces the claim to Fr Martin Edwards who told him that Cardinal Zen had recently told him this is going to happen. I rang Fr Edwards who I`ve known for many years at about lunchtime and he had no idea that the article was in the Times and was somewhat surprised.

I have long been involved with celebrating the traditional Latin Mass. When I was at St Wilfrid`s in Gateshead bishop Ambrose kindly gave me permission for a weekly Sunday Mass in 1996. On taking over St Joseph`s I moved the Mass there as it was a more central location. After I left St Joseph`s the new bishop decided that the Latin Mass should continue there on a Sunday. Unfortunately I now find myself in the strange position of being unable to celebrate that form of the Roman Rite on a Sunday although bishop Dunn has said I can say a private Mass which I do on a Saturday morning. It`s probably not that private now I`ve mentioned it here! However I am thrilled by this news about a liberalisation of the traditional Mass and look forward to being able to celebrate it more often again. I rely on the excellent Rorate Caeli blog for news on this matter. If it is true that the traditional Mass is to be known as the `extraordinary` form of the Roman rite we should be seeing a lot more of it if the term is used in the same way as `extraordinary minister of Holy Communion` seems to be used!

Posted by Fr Michael Brown at 9:07 am