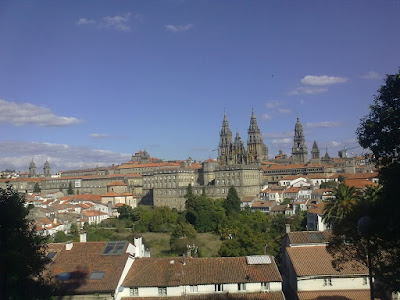 The Pope arrives in Compostela today. I was there a few weeks ago with three priests of the diocese. This year as the feast of St James fell on a Sunday it is a Holy Year. The last one was 2004. In that year I organised a pilgrimage which followed the pilgrim route, or camino, landing at Bilbao and then on to the route through Burgos and Leon. Sorry to say we didn`t walk but had a coach. This time we just landed at Compostela airport and stayed a week so probably got even less grace. Two of our group did take the bus about eight miles out and walk in to get a feel for the camino.
Going to Santiago de Compostela is like stepping back in time: to before 2007 to be precise! There was no sign of an Extraordinary Form Mass anywhere which I thought odd for such an important pilgrimage destination. Una Voce Hispania has a list of regular Masses in Spain and on the Una Voce La Coruna site there are pictures of a High Mass celebrated at Compostela by the SSPX. In fact the whole thing was not a great liturgical experince. The cathedral was full of scaffolding as preparations were being made for the papal visit. The famous botafumeiro was nowhere to be seen so we assumed it was away to be cleaned up for the papal visit. I concelebrated at the 12 noon Mass on Sunday. There was no choir but only an elderly canon acting as cantor. No altar servers either apart from another elderly canon. The Mass was just like a normal parish Mass with four hymns and a Sanctus sung in Spanish (or Eucharistic acclamation I suppose). One day a choir from Argentina came and were able to sing a couple of motets during Mass. A visit to the bookshop by the seminary showed no influence of Summorum Pontificum either.
One day we all concelebrated Mass in the tiny chapel containing the relics of St James. This was a surprise as the sacristan led us to a chapel I never thought we would be going there. It was somewhat overwhelming to be so near to these relics which have so coloured the spiritual life of Spain and the Spanish-speaking world. 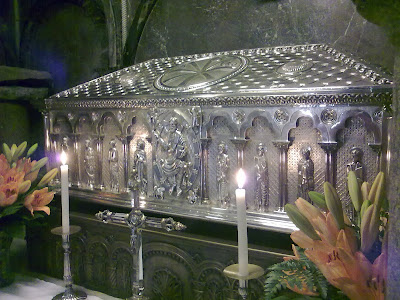 There were a number of items of interest for English pilgrims. For example on going to through the Holy Door to `hug the apostle` (the statue of St James kept behind the High Altar) in one of the side chapels there is a statue of Our Lady of Walsingham. 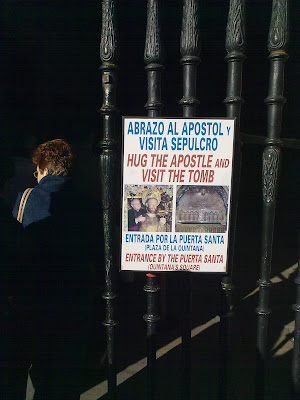 More spectacular was this statue of Our Lady in the Lady Chapel in the monastery church of San Martín Pinario which is now a museum. The notes said it was made in England and brought to Spain by Catholics fleeing Henry VIII. The first mention of it in the monastery archives about 1610 but whenever it got to Spain it was moving to see this bit of English Catholic history in such a glorious setting. There is a Jakob pilgrims' way starting from the next village and ending up in Santiago. I suggest that next time you start your pilgrimage here with a Mass in Maria Kirchental and then walk to Santiago. It is only 2900 km according to google maps - you would be there in no time at all.

And walking is such good exercise; you would love it!

Believe me, after a week in Compostela jokes about walking wear rather thin. I expect the pope will have been spared them.

Father, you will be pleased to learn that the Botafumeiro (gigantic thurible) has turned up in the possession of the ScepticalBeliever, to be used at next year's Dilston Mass, where it will be used to suffocate the Schola in the gallery.

I trust the "Elderly Canon" who sang the Mass did not sing "below the note" - (private irritation to the writer).

Was the scaffolding being erected from which pilgrims who failed to walk, and instead went by plane and bus could be hung?

I notice the poster "Hug the Apostle" - is this a disgraceful breach of copyright? David Cameron's "Hug a Hoodie" was much more original.

We used the botafumiero at St Mary's a few Christmasses ago (at least the amount of smoke managed was either the gigantic thurible or a load of free incense given to Fr Michael). Whatever I, as thurifer, appeared from the smoke like the geni (or genius!) from the bottle. Quite theatrical!!