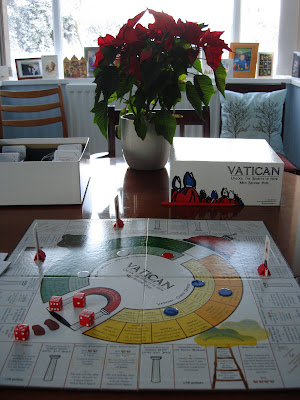 I spent New Year`s Eve with two friends, one of whom kindly cooked an Indian meal for us. I should have taken some pictures à la Fr Z. After this we played the board game Vatican ( `Unlock the secrets of how men become pope`). I`d bought this quite some time ago but had never had an opportunity to play. As it was all new to us our understanding of the rules took a bit of time to settle down. Players get cards as they pass the corner squares which are either challenges to take a stand on the issues facing the Church today or incidents affecting their career. Many of the latter seem to involve the players being kidnapped by guerrilla groups although that only involves getting or losing a few points and doesn`t delay progress around the board. However it took a while to realise that the purpose of going around the board is to collect sufficient jobs in either the local episcopal conference or in Vatican congregations to move on to the next stage which is the nine day interregnum between the death of the pope and the opening of the conclave. The conclave when it happened was over after one day and I am happy to announce that I became pope although I`m still mystified as to how it happened as it all seemed rather quick compared to the first stage. However the game kept us entertained and I look forward to having another try.
The picture above is a recreation of the scene in the dinning room as I forgot to take pictures last night.
Oh and a Happy New Year to everyone. 2010 should be a special year for English Catholics with the visit of the Holy Father in September and the beatification of Cardinal Newman as well as the setting up of the Anglican Ordinariate and the preparations for use of the new translation of the OF Roman Missal.
Posted by Fr Michael Brown at 10:47 am

Happy New Year to you too.

I am actually waiting with bated breath to see how the new translation goes down... I can imagine some people from my former parish going completely haywire about the whole thing. I much prefer the new translation but I can envisage people going berserk.
Sadly(or rather happily) I won't be there to hear the cries of indignation and outrage.

Happy New Year Father. I do hope your new status doesn't mean increased activity from the local guerrilla groups. We wouldn't want to have to ransom you from the Popular Front for the Liberation of Jesmond, or the Forest Hall Freedom Fighters.

Thanks for reminding me how much I want to play this, Father. I must remember to get one...!

Don't worry, Father, as a representative of the Cameronist-Osbornite claque of imperialist-capitalist running dogs of revisionist reactionite anti-Trotskyist-Leninist-Brownite-Harpersonist Tabletistas, I shall arrange a second collection, enough to raise the ransom, which will be about £36-25. Maybe the Bishop will chip in with his 2/6?

A Happy New Year to you and all Murmurers, far and near.

I am glad you enjoyed playing Vatican and were elected Pope. I don't know who your friends were but if they were not clerics they would no be likely (even though eligible) to be elected. And why you be after looking forward "to having another try"? Popes are only elected once! Let your furture opponents be told that.

Finian, I`ve not read all the rules yet but is there one that says that if you win you can never play the game again?

Father, Finian is of course correct. You cannot play again, and must re-locate to Avignon immediately.I can see a great scandal brewing here - if many more people "win", then there will be an inexhaustible supply of Anti-Popes to take up residence with you in Avignon.

A happy New Year to you, at least exile in Avignon will be warmer than here.

Father, if thats what you are after wanting...well, you are Pope so are able impose a new rule. (Hang on to power is a good motto, much followed in many places.)

Quote: "I am happy to announce that I became pope although I`m still mystified as to how it happened."

On the box on the table, under 'Vatican' it states 'Unlock the secrets of how men become Pope.' If you are 'mystified' it would appear you have not unlocked the secrets. Therefore, is your election valid?

I have heard of bishops being pope in their own diocese but have never head of a priest being pope in his own parish. An exciting new development.

Forget about Avignon, let us start a papal court here in H and N. May I be the first to ask for an audience?

I think I`m beginning to regret mentioning this. Maybe I should try Benediction and Te Deum next year a la Hermeneutic.

All Popes express surprise at their election so obviously don't always know the secrets but are surely validly elected. But, they also apparently show reluctance to accept the post and have to be dragged to the throne in the Sistine Chapel before submitting. Reluctance does not appear to have been Fr B's reaction so maybe his election needs scrutiny?

As the author of the Vatican board game I am delighted that you all enjoyed playing it. The rather quick ending is part of the simulation in that conclaves are meant to be short(and they are) since the Church abhors a power vacuum at the top. I also have a new website dedicated to church history which is linked to the board game in that about 50% of the content on the cards can be searched. The site is at www.explorechurchhistory.com

What name did you take?

I understand it was

(try saying it with a soft drink in your hand)

Stephen, thanks for your comment and for explaining the quick ending. I had thought that there would be some kind of bargaining between the players for the position of Pope. However it was great fun and I hope to play agin soon.

theological merchandise! And I thought the merchants were kicked out of the temple!

Congratulations for get into the game