In the end I would say it all went very well. There was a much better turnout than I had feared. with quite a number of people I didn`t recognise: I was told we had sixty people in the congregation. The ceremonies of the Mass went more smoothly than has sometimes been the case. The music was glorious with splendid contributions from the Schola and Cappella as well as our organist. Many of the choir and congregation stayed on for tea or wine afterwards. Thanks to everyone who contributed in any way. Now I`m being asked when the next big event will be!

Here are a few, somewhat fuzzy, photos. The vestments look brighter than they really are. 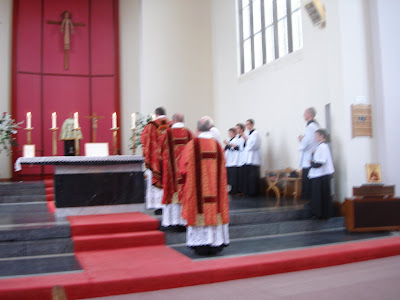 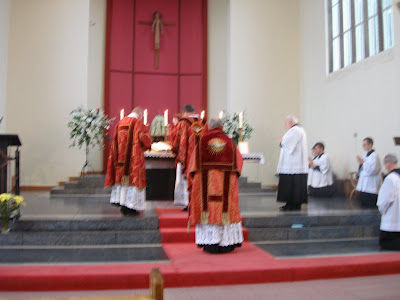 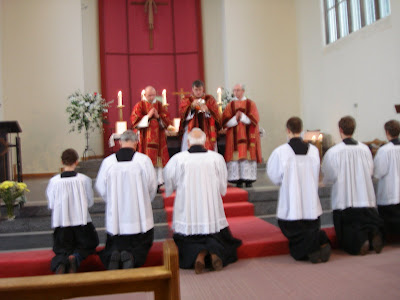 It really was an excellent evening. I think it would be nice to see such an event taking place at St. Mary's?
Any scope for such around 25 September 2009?

MT, I`m glad you enjoyed it. Unfortunately St Mary`s is virtually completely unsuitable for Catholic liturgy of this kind: there is no decent organ and no real sanctuary to speak of. It`s just about ok for Low Mass.

Pat, I`m sorry we haven`t yet removed the strange Jesus with big hands and feet but I hope it will happen before too long.

It was a wonderful Mass Father, thank you.

It was an excellent Mass, Father. Thank you (and Frs Phillips and Dickson), as well as the Schola and Cappella, and not forgetting the altar crew.
As you've mentioned, that strange Crucifix designed by a 3-year-old did impair a little - I just tried not to look at it too much.

Wow I didn't know that they were taking pictures! Is there any way that I could get a hold of any?

Matty, those are the best of the pictures and you are free to copy them from here if that is any good.