Year of the Priesthood: Rome conference for English-speaking clergy 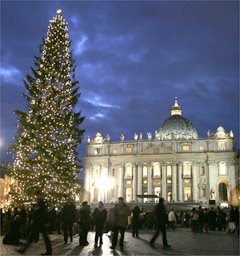 At the Ushaw Conference I announced that there would be conference for English-speaking priests in Rome in January to celebrate the forthcoming `Year of the Priesthood`. There was quite a lot of interest from priests at the conference. Today the official announcement has been made and the details can be found on conference website. Here is the press release:

8 May 2009 – On this 223rd birthday of St. John Baptiste-Marie Vianney, patron of parish priests, the Australian Confraternity of Catholic Clergy and the (American) Confraternity of Catholic Clergy announce a joint conference of their two associations for a special seminar in Rome, January 4 – 8, 2010. This historic combined meeting of priests and deacons is in response to the Holy Father’s designation of 2010 as the Year for Priests and invoking the patronage of the Cure of Ars, Saint John Vianney. Both groups were established to foster and promote ongoing formation (spiritual, theological, pastoral and human) of the clergy in a fraternal setting, which was called for by the Second Vatican Council and highly encouraged in Canon Law. One facet is an annual national gathering whereby lectures and conference talks are given by reputable speakers known for their orthodoxy and loyalty to the Magisterium. The 2010 meeting in the Eternal City is the first joint assembly for both confraternities and will be conveniently located near the Vatican at the Casa Pastor Bonus. Any and all Catholic priests and deacons from any English speaking country of the world are cordially invited even if not a member of either the A.C.C.C. or C.C.C. National Chairman, Rev. Michael Kennedy, PP, (Australia) and President, Rev. John Trigilio, Jr, PhD, (U.S.A.) enthusiastically urge their members to honor Pope Benedict’s Year for Priests by coming to Rome in January 2010 to spend time in prayer, study, and sacerdotal fraternity. More information will be made available at www.yearforpriests-clergyconferencerome2010.org and at the respective websites: www.australianccc.org and at www.catholic-clergy.org or by contacting the media spokesman in Australia, Reverend Father Nicholas Dillon on (+613) 97924422.

Maybe a result of this conference will be the establishment of a UK branch of the Confraternity of Catholic clergy. There is an interesting list of speakers arranged with Mgr Marini, Fr Lang, and archbishop Burke scheduled to take part. Provision will be made for priests to celebrate in both the Ordinary and Extraordinary Forms of the Roman Rite.
Posted by Fr Michael Brown at 10:17 am

Which British seminary teaches orthdox theology? Are there any which integrates the EF as part of formation for example? If not, which makes the effort to teach proper thomast theology at the very least?