Can King Kev save Newcastle? 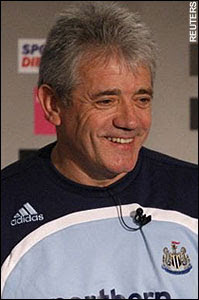 While I was away for a few nights last week in Lille, the news broke and just made it onto the news on CNN on the hotel television that Kevin Keegan was returning to manage our football club. I was eager to get hold of an English paper to read about it. I was never very good at football. I`ve not been to St James` park for over ten years and when I last went I needed to ask a ten year old beside me to explain what was going on and as for the off-side rule... However I follow the progress of the club with much attention and interest and also go to the theatre a lot although I don`t even live in the south! (Cf. KK`s remarks at the press conference.) It has been said that football in Newcastle is different to elsewhere in the country as the fortunes of the club appear to influence the life of the whole city. 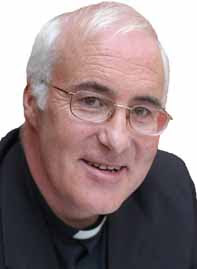 I read when I got home that shortly after the news of Kevin Keegan`s return was announced a couple named their new born son Kevin Keegan. This made me think back to confirmations here in Forest Hall in the autumn conducted by our own bishop Kevin Dunn. He remarked sadly that no-one had chosen Kevin as a confirmation name. We`ll have to wait and see but next time he comes for confirmation in a few years time he may find a whole row of Kevins waiting to be confirmed (and maybe even a couple of Alans).
Posted by Fr Michael Brown at 2:47 pm

Kevin Keegan..yikes! i used to collect his football cards..

"and as for the off-side rule..." Which is 90% of the reason I can't stand soccer. Glorified keep-away. As for KK, well, good luck to you, but he's not going to be able to kick the ball in the net for his players.

[A goal as big as a barn door and the players still can't get it in the net! Another pet peeve.]

Sometime, just once it would be fun if a sports team KEPT the coach, and fired all the players.
:-D

Karen, I`m delighted that North America is immune, despite the efforts of Mr Beckham, to the fascination of football (aka soccer). If it ever caught on there no doubt many of the best players would migrate there and the game would be impoverished in Europe.

Well, I'll tell you this, as long as David Beckham doesn't go into a Latin neighborhood (which is pretty much where you'd find ANY soccer (UK=football) fans he could pretty much walk down main Street USA and not be asked once for his autograph. If he hung out reading the magazines at a local convenience store he'd probably be told "hey, buy something or get out." Show a picture of him to the average American, and they'd be "huh? Who's HE?" He could put on shades and take his kid to Disneyland pretty much without worry.

[BTW, I LOVE sports in general, but soccer bores me to tears.... Rugby, I could watch, even Cricket seems interesting to me...I could see why people enjoy it -- very much a "head" game (as is baseball, btw) -- but soccer? Gimmee a break, get rid of the offside rule, men should act like men instead of screaming fairy queens if someone makes incidental contact. If there's not a bone sticking out, get up and stop whining and get back in the game - the Academy Awards have probably already been given out!

BTW, I finally figured out Australian rules football. There ARE no rules!

/okay rant over and flame suit still on from earlier in the day.]

Thanks Karen. Isn`t it strange that Europe, Latin America, Africa and parts of Asia are mad about it but North America just isn`t interested?

I`m all in favour of cricket as an essential element of a rural landscape but can`t get any enthusiasm together to watch it.

Basically, in the US (and it seems to me Canada too) Soccer is seen as the sport for kids who run, but couldn't beat you arm wrestling. In other words, they couldn't make the football (US football), baseball, or basketball team (and in Canada especially ice-hockey) and they want a letter. I can show you a picture of our high school soccer team and if anyone knew they were even on the team besides their mothers, it would have been a miracle. "He's on the soccer team" is code for "he wasn't good enough for any other sport." At least when I was growing up.

It's seen here now as a conditioning game for lungs, but it's exceedingly boring to us to watch it. We want more scoring for one thing than an "exciting" nil-nil match. or a 1-0 game where one side scores then goes into defensive "keep away."

It's an okay game for girls, but honestly, the little european guys in those little shorts going into screams of hysteria if they are merely brushed on contact just make us want to yell "would you stop crying you little sissyboy and act like a man?" And then you want to slap the guy. US grannies feel the same way. "You could not have come out of my womb they must have switched you in the hospital." It's not really a sport unless someone has died doing it. Now WATCHING soccer is a sport, but I don't think playing it is. I think that's why soccer fans go ape**** and try and kill each other after the game. I would too if I had all these pent up emotions and all I saw was a bunch of guys acting like the biggest fruitcakes when they're hit. No wonder the fans rip up train seats and burn stadiums down.

HERE fans from both teams can have a tailgate BBQ party in the stadium parking lots before games and then go in and watch bone crunching hits and feel relieved.
It's a family atmosphere at most games and you can safely bring grandma and the kids.

And the games go back and forth in scoring. [I know Rugby is like that too from the college games my uncle played in at Penn State.] I know Europeans sometimes say "Well you guys are sissies for wearing all the padding." Not really, Theodore Roosevelt threatened to ban collegiate football because too many players were DYING. Certain football formations were made illegal. And if they weren't padded there'd be a lot more broken everythings.

Dear Karen, as I have indicated I am not all that up on the details of `the beautiful game` but I`d much rather watch it than American football. Yes the padding is an issue. Rugby players don`t need it and not many of them die during the game. And as for having a world series when none of the teams come from outside North America.....
I think we are going to have to disagree on this on the basis of overwhelming cultural prejudice. As I said I`m delighted that North America hates football (aka soccer).

Father, the instinct to hate soccer is pretty DNA coded. So help me if by chance the US ever did win, I guarantee you, 99% of Americans would say "oh, that's nice, what's for dinner?" Ah Rugby, if you're not getting broken bones or have a few deaths every now and again, they're not doing it right. ;-D And we really don't give a flip about calling something "The world series" as far as baseball goes. If they were any good they'd be in a US league. [quite a few players from latin America and some from Asia on on US teams.]

Might I suggest, as a Leeds Utd fan, that relegation and a period in the lower leagues might work wonders for Newcastle Utd's overinflated collective ego. It worked for us....;-)

Paulinus I`m sure everyone wants to see Leeds back where they belong in the Premiership. A spell in the Championship doesn`t appear to have done that much for Sunderland.