On Monday the England striker Michael Owen finally returned to play for Newcastle United after an absence through injury of a year and a day. He had only been back a short time before this while he recovered from a previous injury. Newcastle still lost but it has been a long awaited event. 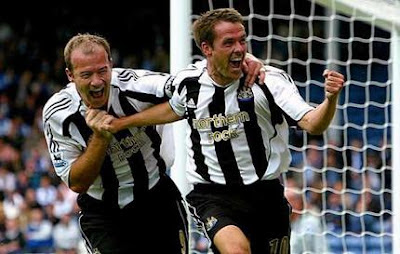 In the next few it looks as if another long awaited event will come to pass when Tony Blair steps down to let Gordon Brown take over as Prime Minister. My mother says things always come in threes. Could it be that the rumours of the Motu Proprio being issued on May 5th will also finally prove to be true?
Posted by Fr Michael Brown at 10:48 am

You may be right but not until (and if) Tony Blair resigns!

Does the title refer to Owen or Blair? :P

John, I`ve added a question mark. Now it can refer to the Motu Proprio.

Hopefully it wasn't this announcement from the Vatican:

- Accepted the resignation from the pastoral care of the diocese of Middlesbrough, England, presented by Bishop John Patrick Crowley, in accordance with canon 401 para. 2 of the Code of Canon Law."

He's only 65 but been on sabbatical for a couple of months. Perhaps he's ill.

Thanks Augustinus. What an interesting anouncement from the Vatican. I thnk bishop Crowley has been ill. Should be interesting to see who gets the job. Middlesbrough has been a bit of a wasteland for the traditional Mass. I see they are starting a Sunday Mass in York on a monthly basis which is a bit of a start but they`ve had to wait a very long time even for that.

Hopefully we won't need the question mark much longer then...

Although I'd rather have the new Novus Ordo translation. The current version is just plain dull..