On the Paris to Chartres pilgrimage of 2003, I met Sr Hyacinthe of the Dominican Sisters of St Joseph. Sister told me that her community gave parish missions and so in 2004 Sr Hyacinthe came to St Joseph`s, Gateshead, with Sr Jordan, to give a week long mission. I have kept in touch since and a few months ago Sr Hyacinthe invited me to her final profession. So today I caught the plane to Southampton ( a journey of 45 minutes) and then after 30 minutes drive I arrived at the convent (at Shirley Holms in the New Forest) for the Mass. The celebrant was Fr Henry Donneaud O.P. In his sermon he spoke of the Church being like a crowd of people on a march in the dark to God`s holy mountain and said that the role of religious was to be guides for God`s people. 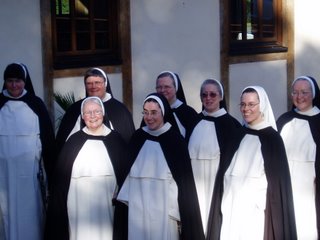 During most of the Mass Sr Hyacinthe beamed from ear to ear as she gave her life to God in a moving ceremony. Afterwards there were photos. Here is Sister (in the centre of the front row) with her community.
Posted by Fr Michael Brown at 10:19 pm

What became of Sr Jordan, whom you also mention? Is she in the photo?