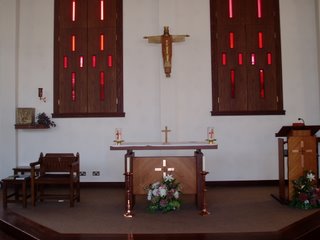 I mentioned in previous posts that my move last year was rather stressful. I can`t find any pictures at the minute of the interior of St Joseph`s Gateshead but it is a mid-nineteenth century Gothic church built to impress. The picture opposite shows the new sanctuary at Forest Hall. The old sanctuary has been closed off to make a much needed church hall and a new one built on the side of the nave as shown here. I have been able to make some changes to the sanctuary with the consent of the bishop and the parishioners. Now it looks like this. 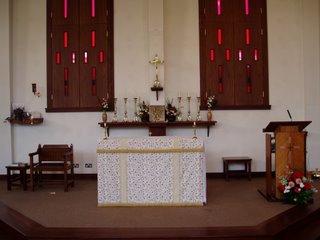 Not hugely different but a few significant changes such as moving the tabernacle, the introduction of a `big six` and an altar frontal. However there are still other difficulties such as the lack of a central aisle which makes funerals and weddings difficult and the lack of a pipe organ. (The remains of the original lie in the choir loft while we have a small electronic keyboard downstairs which is hardly used as we have no-one to play it.)
Posted by Fr Michael Brown at 12:14 pm

I went to Ireland on hols a couple of months ago and the Churches there were just appalling, you didn't even know if there *was* a tabernacle! Or if it was even Catholic - no statues for instance.

So what you've done, compared to Irish churches, looks pretty good really. Although as a young person, if I were on a "parish committee" I'd vote for altar rails, statue of Our Lady, High Altar, get rid of the carpet etc. :D

Thanks Joee. It was quite a battle to win people over to the changes as they had just spent a fortune a few years beforehand to create the new look. I have plans for a couple of icons on either side of the crucifix: one of the Annunciation and one of the coronation of the Virgin to represent the Joyful, Sorrowful and Glorious mysteries. Other changes depend on a bit of a lead from Benedict XVI! I also have another two churches to work on.

Father, well done. It takes wee things like this to change a culture - aand it's probably going to take the rest of my life to get back the baby that went out with the bath water.

A couple of comments. First to joee blogs I would suggest that unless he visited every church in Ireland then his assessment of Irish liturgical architecture is a bit sweeping.

Second, I'm imagining a location for the first celebration of the eucharist. It's a small room on an upper floor. There's no stained glass, no reredos, no high altar, no 'big six', indeed there's not even a visible tabernacle. Do you think that the absence of any of the above detracted from the majesty of what was taking place?

Much improved Fr., especially getting rid of those plastic "candles" and relocating the Tabernacle.

fjm: They didn't have a lot of things in the cenacle, I'm sure, but that doesn't mean we shouldn't gratuitously give from our resources beautiful things in praise and worship of God, otherwise whatever is the point of beauty, if not to humanise us and to glorify the Lord?

fjm, since three thousand were baptised on Pentecost Sunday I imagine the Church had to move away from a small upper room very quickly. Have you read Scott Hahn`s `The Mass as heaven on earth` where he shows that if we want to know what the apostolic age thought about liturgy we have to look at the book of Revelation where we find many of the elements of what is considered Catholic worship?

Thanks Christiano. I feel a bit more at ease in the church now. I must get the tabernacle veils made soon.

Good job, Father! As part of our liturgy course in Ushaw we visited 5 churches in the diocese and Forest Hill was one of them...

This is an improvement, especially the antependium.

Thank you Br Lawrence. I have a purple antependium to put on today for All Souls. I suppose it should be black (the vestments will be) but it`s really for Advent but arrived early and I`m looking forward to trying it out. I`m not too surprised that you had a field trip from Ushaw to view the re-ordering given that my predecessor was on the staff there. I `ll try and think which other churches they could have taken you to! Suffice to say that I was completely devastated when I saw St Mary`s for the first time.
Today we have a `private` Missa Cantata for All Souls. Hurry up please Benedict!

I am devastated to see what WAS a fine liturgical space reduced to this!!
Having been involved in the ordering of the sanctuary some years ago it is more than sad to see its noble simplicity all but ruined by glittery baubles and trinkets.it's like Disneyland!

Sorry to hear you were devastated Cynthia, but if you`ve read my post you`ll see so was I when first set eyes on the church. It really was my worst nightmare. I suppose every parish priest puts his mark on his parish church and it will please some and not others. I`m afraid if you`ve read the comments (most of which are supportive) you`ll see that there are a few more things lined up but the basic nature of the reordering will remain. I can only say `fine liturgical space` was not the first thing that came to me when I saw the church.

I was interested to read Cynthia's comment - from someone who admits to involvement in the re-ordering of St Mary of the the Rosary Forest Hall.

For someone who has only visited the Church in the past year she may have the answers to a few questions.

Why was the Church turned sideways on?
Why is there no central aisle, something common to every Catholic Church I can think of? The result is that there is not even a proper space before the Altar for the coffin at a Requiem.
Why were the Stations of the Cross set out like chessmen above the door into the hall?
Why was the organ left in ruins in the choir gallery?
Why were noisy fan heaters installed which militate against any chance of a 'sacred silence' and make serious music-making impossible?

I must admit that when I first visited the Church my thoughts were not of 'noble simplicity' or a 'fine liturgical space' but rather of something done on the cheap without much thought as to what was needed.]

To describe Fr Brown's improvements as 'baubles and trinkets' is just rude.

Thanks Alnwickian. I would also add the absurd lighting system which requires a man with a scaffold to come out if we need to change a light bulb.