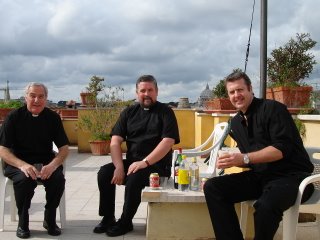 I returned yesterday afternoon from a week in Rome with three priests of our diocese. Here they are enjoying a drink on the roof of the Casa del Clero with St Peter`s dome in the background. They are Fr John Cooper, episcopal vicar for religious and parish priest at Morpeth. I had my last year as a curate with him in 1994-95 at Morpeth and go back once a month to celebrate a traditional Latin Mass there. Also present were Fr Ian Jackson, parish priest of Ashington with whom I`d been to Rome in 1987 and Fr Martin Morris, parish priest of Hebburn. It was a very relaxing trip as there was nothing I was particularly desperate to see. I had thought that I should go somewhere I`d not been before and planned to get to Tivoli but in the event settled for heading off for Santa Costanza on the Via Nomentana as I`d never been to see its 4th century mosaics. I also just had time to pop into the adjacent Sant Agnese. An interesting feature of that church is the gallery called the matroneum which I assume was the place for women to attend Mass: not an arrangement I can remember seeing before.We saw the Pope at the Wednesday General Audience and again on Monday night at the Mass in St Peter`s for the opening of the academic year. Sitting beside me in St Peter`s were a group of young American religious in grey habits. I asked them who there were and they said they were from the Society of our Lady of the Trinity. As we have a parishioner, Br Martin McGough trainging with that order I asked if they knew him and a couple of them had actually been novices with him!There were 9 priests of our diocese out in Rome when we were there. Easy Jet is doing well out of the clergy of Hexham and Newcastle! Also staying the Casa and flying back with us were Fr Michael Weymes who comes from Longbenton parish which I also look after and Fr Greg Price, who spent a number of years with the Camillians before becoming a priest of the diocese. Here is Fr Price with two of our group by the `tank` at the English college where we were invited for lunch by the new spiritual director, Mgr Phil Carroll, who is also from our diocese. Three others were out with pilgrim groups.
Posted by Fr Michael Brown at 6:39 pm