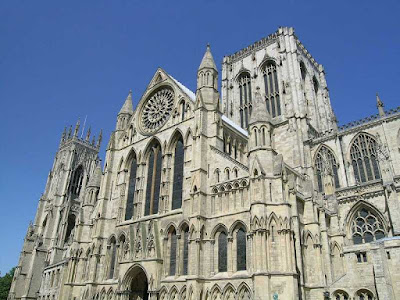 I know this has been widely announced but I held back as I thought an announcement nearer the date might be useful. There will be a sung Mass in the Extraordinary Form in York Minster at 1.30pm on Saturday March 26th. This will be in honour of St Margaret Clitherow. I`m sure she`ll be rejoicing in heaven to see this. Fr Stephen Maughan will be the celebrant. Music sung by the Rudgate Singers will include Byrd's Mass for Five Voices, Iustorum Animæ, Ave Verum Corpus, and Ave Regina Cælorum. There will then be a procession taking in her shrine in the Shambles and ending at English Martyrs` church where there will be Benediction and veneration of the relic of St Margaret. I will be the celebrant for that. This should be a great day for Catholics to honour the witness of St Margaret. Here is the official LMS statement:

The Latin Mass Society is organising a pilgrimage in honour of St Margaret Clitherow, one of its patron saints. It will be held in York on Saturday 26th March 2011.

The pilgrimage will begin at 1.30pm with a Missa Cantata at the High Altar of York Minster. This will be followed by a procession from the minster, via The Shambles and Ouse Bridge to the Church of the English Martyrs in Dalton Terrace, where Benediction and veneration of the relic of St Margaret Clitherow will take place at 4pm.

Use of York Minster is by kind permission of the Dean and Chapter.

It was originally intended that Benediction would be at the Bar Convent, but because of the nunbers that are expected to attend, this has been transferred to the English Martyrs’ Church.

Because of the parking restrictions in force in York, visitors travelling by car are advised to use the Park and Ride facilities. The Askham Bar car park, on the Tadcaster Road near to the A64 to the south-west of York, will be the most convenient as the buses from there pass near to both the Minster and English Martyrs’ Church. It would be wise to allow half an hour to get from the car park to the Minster by bus.

This will be a very special and memorable day, and we must be grateful to the Dean and Chapter of the Minster for their very generous permission, indeed encouragement. Would that our own Bishops were so generous!

St Margaret was born in 1556, and married in 1571. She converted in 1574, and these dates raise some interesting points. On a much less eminent blog than Forest Murmurs, some poster is arguing for the Mass to be celebrated according to the "Rite of York", suggesting that St Margaret would have been more familiar with that Rite.

However, let's examine the evidence. Yes, there was a "Rite of York", as there was a "Rite of Durham", both of which were variants of the almost universal "Sarum Rite" in England. Good Queen Mary, in 1553, in her inherited role as "Head of the Church of England", ordered all Masses in England to be according to the Rite of Sarum, thus effectively outlawing the York, Durham etc rites. This situation remained in force until the Elizabethan settlement of 1560.

Move on to 1570, and the promulgation by Pope St Pius V of the Tridentine Rite (as a result of the Council of Trent). So, when St Margaret converted in 1574, the universal order of Mass was that of Trent, not Sarum.

Of course, because of persecution in England, it is not certain whether the 1570 Roman Missal had found its way into every corner of the Kingdom, maybe some older Marian priests were still using the Sarum Missal. So, maybe St Margaret heard Mass in the Sarum form, or the Roman, but what is certain is that it would not have been in the York form.

So, don't worry Father, go ahead with the Tridentine and ignore the anoraks.

I will not be able to be present, difficult family circumstances do not allow my absence from home, but I will be thinking of you all.