I was delighted to be asked to be subdeacon at the Annual Requiem for Una Voce Scotland in Edinburgh on Saturday. The Mass took place in St Andrew`s, Ravelston, where Fr Emerson of the FSSP celebrates a Sunday Mass. Here is a picture taken by Sheila Webster. As you will notice we were rather short of altar servers but still managed. Mgr Boyle was the celebrant and Fr Emerson the deacon. It was good to see Fred and David again from the Scottish Gregorian Group. 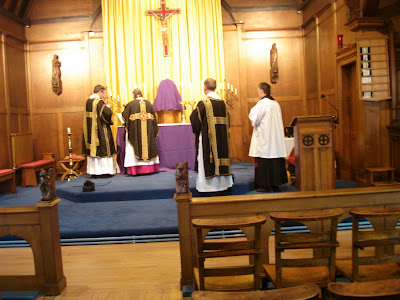 You seem a bit light on the congregation too.

Personally I find the few servers the better. Rome was always known for using the minimum number.

Interesting to see the violet of a domestic prelate's cassock showing under the alb. Whilst, in better days, a bishop would have worn his black choir cassock for a Requiem, violet cassocked monsignori didn't except on the death of a pope.

The picture shows only the first row of the church which was used for distributing Holy Communion. There was a congregation of about 30.

Certainly not. Black choir cassocks, with violet cuffs etc are older than the use of violet ones. The use of violet by bishops dates from when the cardinals moved up to scarlet from the 'sacred purple' (which they retained for penitential days).

What was invented in the nineteenth century was the 'habitus pianus' (black cassock, without train, and with fed piping etc).

It was the habitus pianus which I was thinking of. Interesting and a little disappointing to hear about black choir cassocks for bishops.

oh bother. My excuse was I was in London, but I thought some of our other regular servers would've stepped into the breach...