Stick to the script! 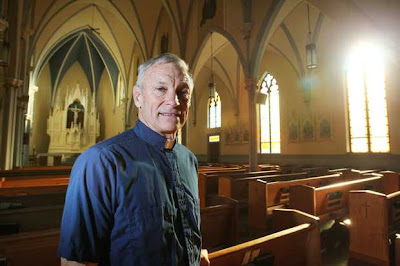 I`d not seen this story of the demise of an ad-libbing priest.If the ad-libbers are going to be taken to task things could get very busy for the Congregation for Clergy!


The Rev. William Rowe, whose refusal to adhere to the wording of the Roman Catholic Mass caused him to become known as the "ad libbing priest," is officially barred from performing church rites.
The banned practices include performing Mass and officiating weddings.

According to a statement released Wednesday by Belleville Diocese Bishop Edward Braxton, a 60-day appeal expired making an earlier ruling by a panel in Rome final.

That ruling by Cardinal Mauro Piacenza, prefect of the Congregation for the Clergy, stated that Rowe's written argument that changing the liturgy to make it easier for parishioners to understand was no basis to remove him from performing priestly duties, "has no canonical basis in law or in fact and is hereby rejected."

The recent poll highlighted by Fr Z seems to show Fr Rowe underestimated the Catholic response to the new translation!

This post reminds me of a situation which arose a year or so ago.
Several prominent priests, including one particular from this Diocese went public with their vehement opposition to the new translation. This was obviously intended to cast doubt on the wisdom of the Magisterium of the Church in imposing the new translation of the Mass.

Whilst I have absolutely no evidence that those priests will be "ad-libbing", one cannot help but wonder how lay Catholics will be viewing the attitude of those vehemently opposed priests when they say Mass.

There seems to be an attitude of opposition to anything coming from Rome. This is deeply unsettling to lay Catholics. We expect better from our priests.

”The banned practices include performing Mass and…”

That statement is very telling – Mass as ‘performance’…

I don’t know this Fr. Rowe, but I have known quite a few ‘Fr. Rowes’. All are ‘of a certain age’, imbued with the spirit of the 60s - though they would prefer the ‘spirit of Vat II’ moniker. Most will have begun their ministry in the rubrical strictness of pre-Vat II days and were only too willing to throw off the burden of saying the Black and doing the Red.

While they eschew clericalism, preferring to be ‘one of the boys’ (“Hi, I’m Fr. Bob…”), their behavior actually promotes it. The Mass must be brought down to the level of the people – as they perceive it. ‘Hard’ words must be substituted with monosyllables. It’s not a sacrifice, it’s a meal. ‘Many’ should be ‘all’. ‘Consubstantial’ must be ‘one’. Gestures must be made simple also. No need to get on your knees, just hold hands. Etc. etc.

But they belong to a dying breed. They just haven’t realized it yet.

The one closest to me is our retired PP, who still functions in the parish. And his name is not Rowe at all, but mór is trua it’s a very Irish name…