Some good news in Hexham and Newcastle

There have been a few things happening which have cheered me up recently. The first is the opening of a Dominican house in Durham back in October. The Dominicans were invited to take over the running of both the university chaplaincies of Newcastle and Durham universities. I`ve heard some complaints that it means there are fewer interesting jobs for diocesan clergy as a result. Well I suppose as secular clergy we shouldn`t be surprised if we end up running parishes. Maybe priests could take on some of the curial jobs in finance and education which they used to have if we need diversity. Dominicans are ideal for university chaplaincies  and I thought it was particularly good for Catholic life in Durham to have a new boost which a community brings. Others have said vocations might be lost to the Dominicans who might have applied to the secular priesthood but I`m sure students can tell the difference between secular priesthood and religious life. We had seculars as chaplains at St Andrews and that didn`t stop me and others pursuing vocations in the religious life including the Dominicans!  (Now I`m a secular priest but I did try my vocation with the Discalced Carmelites for six months.)

Anyway here is an article from the Northern Echo on the new community.


A CATHOLIC order has established a new community in the region.
Three friars from the English Province of the Order of Preachers, also known as the Dominicans, have made their home in Durham City, taking over running Durham University’s Catholic Chaplaincy and St Cuthbert’s RC Church, on Old Elvet.
They did so at the invitation of the Right Reverend Seamus Cunningham, the Roman Catholic Bishop of Hexham and Newcastle.
The establishment of the community was marked by a celebration of Mass on Wednesday, November 7 – the Catholic Feast of All Saints of the Dominican Order – led by the Very Reverend John Farrell, Prior Provincial of England within the Dominican community.
Dominican friars arrived in the North-East in 1239AD, less than 25 years after their Order was founded.
Their medieval priory still exists on Friars Street, Newcastle. It is now a restaurant and craft centre.
The priory was suppressed in 1539, as the last prior denounced Henry VIII’s claim to be the Supreme Governor of the Church of England and fled to Catholic Scotland.
However, friars were active around Hexham, Northumberland, in the 17th Century and St Dominic’s priory was re-established in Newcastle in 1860.
The new religious house represents the Order’s first ever presence in Durham.
Fr Benjamin Earl has been appointed parish priest and Catholic Chaplain to Durham University. Fr Thomas Skeats and Fr John Patrick Kenrick assist him.
Fr Earl said: “It’s a huge privilege to be asked to continue in Durham the outstanding work of priests from the diocese of Hexham and Newcastle.
“The new religious community has been touched by the very warm welcome received from parish, chaplaincy, University and diocesan communities and we very much look forward to working with all those groups to promote prayer, study and preaching of the good news in Durham and the North-East.”
For more information, visit english.op.org

Secondly on December 7th Fr Warren organised a torchlight procession in Hexham in honour of the Immaculate Conception which drew a crowd of 500.  I was sorry not to be able to be there but hope i can be if it happens next year. Here are some pictures: 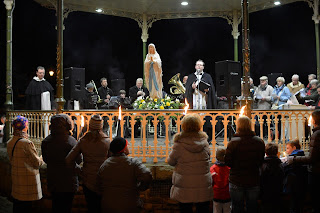 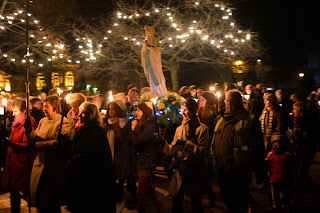 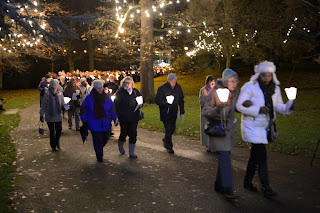 The third item was the first regular EF Mass in St Augustine`s Darlington. Fr Elkin has written about this. It seems that 50-60 people turned out on Wednesday night for Fr Tully`s Low Mass. I hope to make it through for the next one in January.
Posted by Fr Michael Brown at 9:45 am

According to Fr Elkin, the Darlington Mass was a Novus Ordo Mass.

Please do not post anonymous comments. It was an EF Mass. Fr Elkin says: `In St Augustine's Church, Darlington, I was present at the first traditional Latin Mass in this church for very many years`

When he talks about it being a `new` Mass he means a new venue for the EF Mass.

Fr Elkin's blog clearly describes this Mass as an "OF" Mass. Not just once, so it is not a typo.

I had a Dominican chaplain at University; good to see this development at Durham. There were also three Dominicans at the Hexham torchlight procession. The homily by one of them went down very well; nice meaty stuff.

So it does. It is however a typo as the Mass was definitely EF. Can you believe that the parish council had to discuss whether to have an OF Mass in the parish?