I`d long suspected I was avant-garde 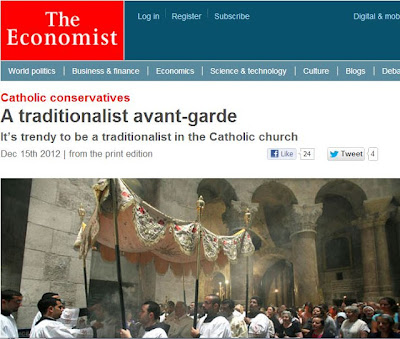 H/t to Fr Z for spotting this article in The Economist and is now all over the blogs so I`ll repeat it too. Nice they`ve noticed. Not everyone has, especially within the Church!

The Latin Mass Society of England and Wales, started in 1965, now has over 5,000 members. The weekly number of Latin masses is up from 26 in 2007 to 157 now. In America it is up from 60 in 1991 to 420. At Brompton Oratory, a hotspot of London traditionalism, 440 flock to the main Sunday Latin mass. That is twice the figure for the main English one. Women sport mantillas (lace headscarves). Men wear tweeds.

But it is not a fogeys’ hangout: the congregation is young and international. Like evangelical Christianity, traditional Catholicism is attracting people who were not even born when the Second Vatican Council tried to rejuvenate the church. Traditionalist groups have members in 34 countries, including Hong Kong, South Africa and Belarus. Juventutem, a movement for young Catholics who like the old ways, boasts scores of activists in a dozen countries. Traditionalists use blogs, websites and social media to spread the word—and to highlight recalcitrant liberal dioceses and church administrators, who have long seen the Latinists as a self-indulgent, anachronistic and affected minority. In Colombia 500 people wanting a traditional mass had to use a community hall (they later found a church)
Posted by Fr Michael Brown at 7:20 pm