The Ordinariate at Gainford 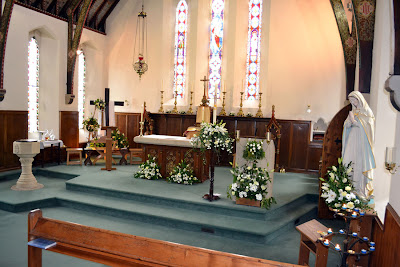 As mentioned in the previous post last night I was due at the ordinariate May Festival in Gainford. This is way down south, somewhere near Darlington, and my sat nav told me it would take 70 minutes to get there. I`ve never been to Gainford before but had heard good reports from Fr Michael Melia who used to live there in retirement. I was somewhat alarmed when heading down the A1 to be welcomed to North Yorkshire as I thought it must at least be in Co Durham but eventually the side roads took me back into Co. Durham and I arrived on a lovely spring night which fortunately remained dry for the outdoor procession.

The Mass was lovely, the singing amazing. If you are ever near Gainford on a Sunday morning do go and you will hear something you will never forget. The Mass was simply that from the OF Roman Missal but everything was done with great care and attention to detail. After Mass we processed to the newly-restored grotto to sing the Salve and then went back to church for Benediction.

I am a great fan of the ordinariate and wish it had happened back in the 90`s. The question always arises what is the Anglican patrimony they seek to preserve so as to be a bridge into Catholic unity for the Anglican tradition? Well the Mass last night was straight from the Roman Missal but there is an ethos which made it distinctive. Catholics can be reluctant singers but this congregation raised the roof and like to sing all the verses of hymns. I`ve heard Catholics even complain about the ordinariate because they like to sing. Also the altar servers were impressive in their seriousness and attention to detail. All of this could be done in a mainstream Catholic parish but there is something about the ethos of our parishes which is not open to music of this sort outside of cathedrals or a few parishes in central London. I know because I have tried with introducing chant here at the 10.30 Sunday Mass at Forest Hall. Apart from complaints about having a Latin Gloria at all people expect the repertoire they have grown used to an I don`t know how to expand that.

As regards the ordinariate one thing which I would have thought was part of the Anglican patrimony was a married clergy. It is interesting to read that the ordinariate in England have accepted a married man for seminary training as is allowed in the provisions of Anglicanorum Coetibus and it is somewhat disappointing that Fr Bradley says this is a one-off. I hope the ordinariate will offer a familiar home to Anglicans looking for a bridge to enjoying full communion with the Catholic Church and won`t be overly-Romanised as has happened with Eastern Uniate groups in the West at times.
Posted by Fr Michael Brown at 10:42 am

I'm originally from the H&N Diocese but now I live in Yorkshire and I'm the organist at St.Anne's in Keighley. The style of liturgy you describe sounds quite similar to ours - the Altar servers are very well drilled and know exactly what they should be doing. There is always incense at the 11am Mass which is wonderful. The Master of ceremonies runs quite a tight ship I would say. We sing all of the Mass and have stuck to the Missal chants in English and Latin since their introduction which the congregation now sing quite well. I am also battling to get the choir to start singing the propers taken from the Simple English Propers which is a free resource and these have worked well. I would recommend having a look at them.

However, old habits die hard, and I am regularly fielding off requests for hymns like Shine Jesus Shine and more Marian hymns.

I think I am slowly but surely winning the choir over to doing things properly but the congregation may take more time.

It can be done with a bit of energy and enthusiasm (i'm 25) and a choir who are willing to give chant a real go and a supportive PP.

I have felt for a long time, that Anglican churchgoers have a lot to teach us. It is even more remarkable when we think that they do not have the treasure of the Real Presence in their churches.

As an Ushaw student in the early 60's, a couple of us used to sneak into the back of Durham Cathedral to listen to Evensong. Of course, admitting as much to Mgr Grant etc at Ushaw would have had severe repercussions, so we said Nowt!

Tom I`m sorry you are no longer in H & N! There just don`t seem to be any available Catholic organists or choir directors who come my way. I`ve given up on trying to do anything with music at parish Masses but enjoy bringing choirs in for the occasional EF Masses which very few parishioners attend. It`s all very disappointing.

1569 they have indeed. Catholics seem happy to accept good church music as a feature of Anglicanism but prefer `Colours of Day` in their own churches.

Fr., the music today at St. Mary's was great - an example of how modern music can be inspiring and worthy of what we celebrate in Mass. And "Walk, walk in the light (The Spirit lives to set us free...)" is one of the good ones!

Catholic Coffee I`m glad you liked it. The music grouup are much appreciated. You may however gather that it is not the kind of music that fills me with enthusiasm but it`s what we can do on a Sunday. I don`t choose any of the music.

Catholic Coffee, you`ve got me wondering about your identity since I saw your post on Fr Blake`s blog about Lumen Gentium 15 and 16. Not many at St Mary`s on a Sunday morning will have that kind of knowledge!