New location for Extraordinary Form in Hexham and Newcastle 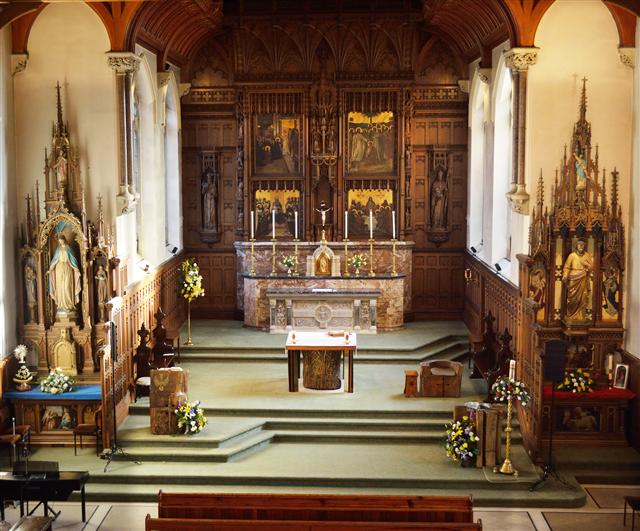 As you may have seen on our LMS diocesan rep`s site we have a new location for the Extraordinary Form in the diocese at St Augustine`s church, Darlington Mass will be said once a month on the second Wednesday at 7pm by Fr Paul Tully. The first Mass is on December 12th: I hope it is well supported. It`s a church I`ve never visited but from the picture above it looks like an ideal location for the Mass, having the high altar still intact.

I`ve been trying to get over to St Joseph`s, Gaeshead once a month on a Sunday to help with the EF Mass there but so far the avalanche of baptisms I`ve been experiencing this year have made it impossible so I`ve decided to have a Low Mass at Forest Hall on a Sunday afternoon once a month. There is normally Benediction at 4 on a Sunday afternoon so instead on the first Sunday of the month, starting in December this will be an EF Mass.
Posted by Fr Michael Brown at 12:49 pm

As you would see from my latest email the Mass starts at 7pm. My error, my apologies

It is indeed a beautiful Church, or was. I was there as a student and Deacon, which was before the new altar pieces were put in, and saw the hollowed out tree trunks used for the pulpit, the support of the altar and presidential chair only when returning for a friend's funeral. I dislike these tree trunks intensely.