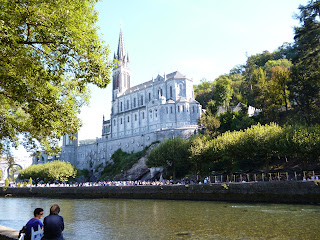 I got back late on Friday night from the LMS pilgrimage to Lourdes, thanks to a lift from Stansted provided by our LMS reps David and Theresa. David has already blogged about the pilgrimage here. Paul Waddington has given an account here.  I`d been a few years ago with the LMS to Lourdes and had been thinking it would be good to have another pilgrimage with the EF Mass so was very pleased when asked to be chaplain. The group was quite small, consisting of twenty-two people five of whom were not Catholics. We had a broad age range from Timothy in his twenties up to Fergus who is eighty-seven.

Celebrating the EF was no problem in that no-one objected to us doing so although as David points out some of the venues had their own hazards. The Mass in St Gabriel`s chapel on the first night was difficult in that the altar was very small and when I lent down for the consecration of the host the whole altar threatened to tumble over. Mass at Bartres was lovely as we had the original high altar to use. The last three Masses were sung but onlly because David, the MC also doubled as cantor for the propers! Somewhat unorthodox I suppose but the only way it would work.

I enjoyed preaching on the life of St Joseph of Cupertino and the story of how he found a flock of sheep making the responses with well-placed `baa`s` when he recited a litany. The whole story is here. 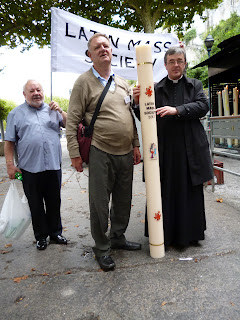 So thank you LMS for asking me to be chaplain and thanks to the group for your support.
Posted by Fr Michael Brown at 11:13 am

Congratulations. Father.
Keep up the good work despite small numbers. I have often heard it said that "God's work is never done by large numbers", and "the majority, by definition, will always be mediocre!"