Things you don`t expect to see no.4

Part of an occasional series. 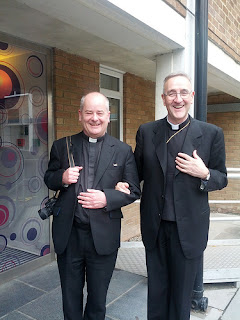 My goodness. Whatever next? A nuncio at the Faith Summer Session! And with that Fr Finigan! H/T to Mulier Fortis.

One wonders what the E&W Bishops feel about it?

Answers on the back of a postcard, please.

Why do modern clergy have to dress like non-comformists?

The nuncio would look so much better properly dressed.

Don't be so po-faced, Rubricarius. Both priest and Nuncio are absolutely properly dressed. I only wish all of our clergy were as correctly attired.

They look nothing like any Non-Con ministers I see.

As you can not see my face it does seem rather presumptuous. to say the least, to say I am 'po-faced'.

As our learned blog-host will confirm as a Doctor of Canon Law the rules in force in 1962 prescribed excommunication for not wearing the cassock in ordinary circumstances (CJC1917 188,#7). If you think the photograph shews 'properly dressed' clergy I fear you are in need of some revision of the rules governing clerical dress. Though I suppose 'Cafeteria' style rules the modern day...

As I stated earlier the nuncio would have looked rather impressive in his ceremonial dress.

Rubricanis, like so many in the Church today, is both selective and out of date. The Code of Canon Law he states was in force in 1982 might indeed have stipulated the cassock as required dress. The 1983/4 Code, in Canon 284, is rather more practical (and tolerant). Or does Rubricanus not accept the later Code?

I am always pleased to be out of date, usually by thirteen days.

Notwithstanding that if you actually read what I said I was not claiming anything was in force in 1982. I referred to the CJC in force in 1962 - a date which many people seem to imbue with magical properties these days.

I might have added that in England the requirements of CJC1917 188,7 were mitigated by provincial Synod as it was, I understand, against the Law of the Land for a cleric of the Roman Church wear a cassock in public lest he be mistaken for a cleric of the Church by Law Established. As we are now in much friendlier times with Pope Benedict allowing the Primate of the CofE to celebrate in Roman basilicas and present him with gifts of pectoral crosses I doubt that would be an issue now even if the civil legislation was in force.

However, and more importantly, I still maintain that the nuncio would have looked far better and given a better impression in his cassock etc. (c.f. photo of him on the Transalpine Redemptorist blog). As the event was about deepening the faith of younger people surely impressions are important.

Let's indulge in a bit of speculation, shall we? The Nuncio and Fr Finigan are pictured at the door of some venue or other. Can we guess that the pair are going into the building, so have travelled by some form of conveyance to the venue. Whether they came by taxi, bus, train, car, horse or donkey cart, formal,liturgical dress would surely have been much too bulky and constricting, and could have caused damage to what must be expensive Archiepiscopal "gear".
Anyway, how does one fit a mitre into a low roofed conveyance?

Do we know whether the Nuncio changed into his finery inside the venue? If he did, then Rubicarius has cast aspersions on the sartorial elegance of a Prince of the Church. A much more serious offence than wearing a clerical suit in a photograph!

Finally, (I hope), Rubicarius accuses the Nuncio of dressing like a Non Conformist. Since the Non Cons around here tend to be women, and wear rather fetching skirts and dresses when "on duty", then the accusation falls at the first hurdle.

I suppose I should apologise for calling Rubicarius "po faced". Of course, I do not know what he looks like, but we all know what he sounds like.

The photographs I have seen, and they may not be a comprehensive, would suggest your hypothesis is incorrect but I am, as always, happy to be proved wrong. I really cannot think of an event where a mitre would be worn in a car, which is what I understand you mean by ‘low-roofed conveyance’ although I once saw a High Mass cohort of London Oratorians struggle into the back of a car vested in cope, dalmatics and birettas at Fr. Michael Napier’s funeral.

However, for non-liturgical, important, functions one would expect appropriate dress as when the Nuncio presented his credentials to Her Majesty The Queen as here.
I very much doubt the Nuncio walked from Wimbledon to the Palace for that meeting and managed, without too much difficulty, to get into a car. Perhaps we should conclude that this event he took far less seriously?

Now as to non-conformists I must stand corrected. There are some very correctly dressed non-conformists such as this, famous, one and others such as this, sadly, departed one. I can only conclude that the reverend gentlemen who feature in the photograph on this blog post are of the John Bercow school of dress.

Now, 1569Rising, you do concede you have never seen me yet you now claim to know what I sound like yet you have never heard my voice. I must say I find your use of the English language confusing.

Rubicarius and my good self seem to be involved in a convoluted sartorial discussion of a clerical nature. To answer his points would probably appear too boring for the casual Forest Murmurer, but one or two comments are called for.

I once witnessed a certain clerical gentleman of the Roman Persuasion arriving at a church south of the Tyne, having crossed the Tyne Bridge,in his car, dressed in alb, stole with a chasuble over his arm. Very elegant he looked too.

Rubicarius's links to photographs of the Nuncio presenting his credentials to HM The Queen, The Rev Dr Lord Paisley of Bannside and Lord Tonypandy do not give us any help in deciding what style of clerical dress is appropriate for everyday wear.

Formal court dress is always required in the case of ambassadors presenting their credentials. In the case of a Catholic prelate, then the Nuncio is wearing the correct dress for the occasion.
Dr Paisley does not, I assume, wear ermine at home, nor in his pulpit at Martyrs' Memorial Church. At least he wasn't on the Sunday that I was present to hear him.
Lord Tonypandy, George Thomas MP as was, always wore the correct Speaker's Dress when on duty. but hardly going to and from his South Wales constituency at weekends.
John Bercow is an absolute disgrace. In any case, George Thomas was never an ordained Methodist Minister, he was actually a Local Preacher.

As far as my knowing neither what Rubricarius looks like, nor what his voice sounds like, yet I have the nerve to call him po-faced and by extension po-voiced. All I have to go on is his writing, which seems to me to display a certain narrowness of view. Others, but not I (of course) would suggest he should enter his work in Pedantry Corner in Private Eye.

The Nuncio certainly did not have to walk to the Palace, and neither did he need to worry about headroom for any headgear :)

But if the gentleman in question was from south of the Tyne would that not mean he was not a Geordie and indeed from that colony most loathed by Geordies on the south bank?

As to writing for 'Private Eye' then yes please! Can you get me a contract?

I confess to being quite envious of you for having met, or at least heard, the Lord Bannside in person. The same has always struck me as a pillar of integrity who despite his somewhat less-than-moderate views as an MP always sought to represent those on the 'other side' to the same best of his abilities as those on his 'own side'.

It is of great relief that I can agree with you, dear 1569Rising, on the subect of the current Speaker of the Lower House!

For what it's worth - the Nuncio wore his mitre when celebrating Mass, and Fr. Finigan was attired in a cassock when carrying out liturgical stuff.

Thanks for the link, Father!

How pleasant to be able to agree with you, but can I explain the situation of the Clerical Gentleman of a Romish Persuasion crossing the Tyne in vestments. He was a born and bred Gateshead Lad exiled by his Episcopal superior to a barren territory north of the Tyne. He was not, as you suspect a Makem Person.

I am sure a word to Ian Hislop would secure for yourself a spot in Pedantry Corner. Failing that, you could always try Guido Fawkes.

I have had the pleasure, not only of hearing Dr Paisley in the flesh, (the sermon lasted 80 minutes), but I had tea and cakes at his home. You are correct, his Catholic constituents in County Antrim thought very highly of his impartial handling of constituency problems. Not that they would have ever considered voting for him, such was (is?) the tribal nature of NI politics. Actually, Enoch Powell had a similar reputation among Catholic s when he was Ulster Unionist MP for South Down.

So, Rubicarius, we can agree on many things.