This is very late but just to say back on May 29th I was delighted to be at Fr Grieves` priestly ordination at St Anne`s, Darlington. Fr Dickson wrote an account of the evening shortly afterwards. What stays with me is the enthusiastic singing of the congregation, the beautiful singing of the Byrd four-part Mass and the well-trained altar servers. Two other things struck me too. Maybe there had been a lack of communication but when one of our diocesan priests got up to read the Gospel he said `The Lord be with you` and got a choral response of `And with your spirit` and the same for the introduction to the Gospel. It marked for me our sometimes utilitarian approach to liturgy compared to those of an Anglican background. The other thing was that at the consecration the well-drilled torch-bearers raised their torches at the elevations. I`d not seen that done before and assume it is an Anglo-Catholic practice. I`m wondering whether I like it or not and whether to introduce it here at Forest Hall as we often have torch-bearers on a Sunday.

Here`s a picture from the Ordinariate Flickr page of Fr Grieves and his team of servers. 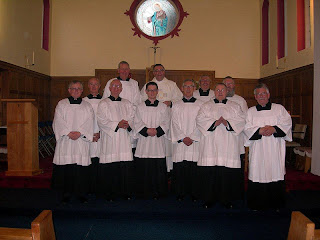 Ad multos annos to Fr Grieves and the Darlington Ordinariate!
Posted by Fr Michael Brown at 11:20 am

As I think I told you, Father, when I was a boy chorister at St Michael's in Newcastle every response was in 4-part harmony, we just (clever us) picked up the key from the celebrants chant. We NEVER had Gregorian Chant propers & had polyphonic Ordinary every Sunday. 3 Sundays were Missa Cantata & the 4th Sunday Missa Solemnis.
4-part Domine Salvum/Salvan Fac was sung every Sunday.
Just before 'Rising' responds Queen Victoria had long been off the throne although George VI was in good health.

I`m always disappointed to hear that Solemn High Mass was only once a month. Sad about lack of Gregorian propers too. Still I`m sure it was all preferable to `Shine Jesus shine`.

Father, I am not in the least bit surprised. I remember a couple of years ago seeing an Easter Eucharist from York Minster, with Archbishop Sentanu as Celebrant. Apart from the immaculate ritual, the most striking thing, for me, was communicants kneeling at the altar rails, and receiving on the tongue.

Things weren't always perfect pre-Council. My first ever experience of a Solemn High Mass was at Ushaw, aged 13. My own parish never, ever, had either a Missa Cantata or High Mass.

His eminence O'Neill tempts me to make some caustic comment on his great age. I must ask him if St Michael's sang a Te Deum on the news of the Relief of Mafeking? and was he there?

Finally, and this is important to genealogists everywhere. St Michael's Parish Registers have now been deposited with Tyne & wear Archives, Blandford House, from 1873. Very important, since St Michael's was the principal parish for Irish immigrants to Newcastle. Some of us have been nagging the incumbant for over 20 years.

Father, I am grovelling.
Before His Eminence the Great O'Neil chastises me for my inability to spell "incumbent" correctly, I hereby confess my slip of the keyboard. For my penance, I promise to watch the Millipede and Balls without smashing the screen.

"The other thing was that at the consecration the well-drilled torch-bearers raised their torches at the elevations. I`d not seen that done before and assume it is an Anglo-Catholic practice."

I was at Mass recently at Farnborough Abbey and the torch bearers there did this. I doubt it's an Anglo-Catholic practice.