Last week I was with a group that stayed a couple of days at the Benedictine house at Argentan in Normandy. We went to witness the profession, as an oblate, of Dorothy, the organist at St Mary`s. Dorothy`s links with Argentan derive from her friendship with Mary Berry who often visited. For anyone who doesn`t know Mary Berry was, until her death on May 1st, a leading authority on Gregorian chant in the UK. Dorothy, who had been an Anglican sister for many years before she became a Catholic, lived in Cambridge for a number of years and was involved with Mary Berry`s chant group there. She was most keen that her friends should share in her profession and so off we went.
There are thirty-eight sisters at the monastery which is renowned for the quality of its chant. Mass is celebrated according to the Novus Ordo. I concelebrated on both days. It was an interesting experience. I have at various times in my priestly life been advised that instead of being enthusiastic about the EF I should be applying my energy to promoting the use of Latin in the OF. Well, here was an opportunity to see it celebrated with the best chant and with an ad orientem altar. I had the the experience of chanting the concelebrants parts of Eucharistic Prayers 3 and 4 in Latin which is not something I`ve ever expected to do. However, while to the casual observer there would appear to be little to separate this Mass and the EF , I still felt the lack of the EF. I have introduced a `chant Sunday` once a month at Forest Hall at the 10.30 Mass which seems to be going well and in which most of the ordinary of the Mass is sung to chant but I still believe that the OF is essentially a vernacular liturgy at heart.
The sisters were very welcoming to our group. On Wednesday afternoon we went to the Grand Parloir for recreation: the sisters on their side of the grill and our group on the other. Each side introduced themselves, Dorothy and a friend sang a song about Zacchaeus ( the subject of the Gospel at Mass as it was the feast of the dedication of the church) and the sisters sang us a three-part Magnificat. The sister`s hospitality was second to none; the food and accommodation were excellent. It is a pity that they have not had any novices for a while and I hope that changes before too long.
Here is Dorothy making her profession: 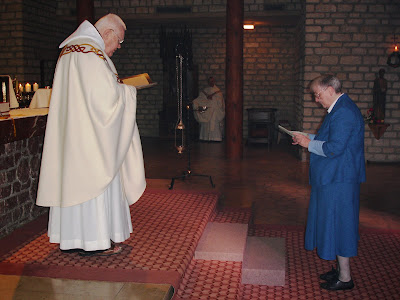 Here is our group ( apart from Alan who took the photo). 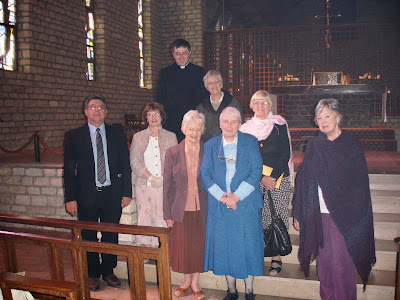 Posted by Fr Michael Brown at 9:04 am

While I generally applaud the celebration of the OF entirely in Latin, I agree that the OF was devised to be celebrated in the vernacular. Whenever, I have attended a Novus Ordo Latin Mass, I have thought there was an artificiality about it. A self consciousness on the part of priest and people that I have never felt at an EF celebration.
I do however feel that mixture of Latin and the vernacular can work very well in the OF. If there iwere added other elements that are characteristic of the old rite e.g. good vestments, kneeling for Holy Communion even, dare I say it, the eastward position and the silent canon, it would so much to improve the modern rite. It would also make the average Sunday Mass, in the average parish, much less of a trial to those of us of a sensitive disposition.

Michael I agree. I too am of a `sensitive disposition` with regard to this. Unfortunately what we regard as a trial many others regard as de rigeur and regard any attempt to introduce these elements with at the best, suspicion or some kind of fear. At Forest Hall we have a guitar Mass on the first Sunday which I hope shows I am happy to regard this as the legitimate preference of some and on the second we have a `chant Sunday` with most of the ordinary to chant. I only wish those who are advocates of the guitar-based worship would extent the tolerance to the chant that we do to them but that appears to be too much to ask for.

When I was living in London as a youngster, not only Brompton Oratory, but Westminster Cathedral used the high altar for the novus ordo Mass.

With the Latin liturgy, and the choirs' first rate singing of the Mass settings, I used to think, rather superficially, : "Well, this is as good as the "old" Mass".

But it wasn't as good, of course. How could it be ? The richness of the old prayers had been replaced with (even in Latin) banal new prayers. The novus ordo was a huge impoverishment.

I think I first began to realise this when serving low Mass (ad orientem) in Latin. The new liturgy lacked the seamlessness of the old. And I could feel that the celebrant was not absorbed in it as he had been with the "old" Mass. The prayers no longer seemed to flow. Periods of silence suddenly seemed artificial. And there was a certain disjointedness in the actions.

To anyone who doubts this, I always say : compare the old Offertory prayers with the new.

Mutual enrichment ? Well, in this case, as far as I can see, enrichment is mainly a one-way process !

Please be good enough to advertise this online petition amongst your readers, friends and contacts.

Thank you.
Michael.
We the undersigned petition the Prime Minister to deny any extension planned for the 1967 Abortion Act to Northern Ireland, as we believe in the right to life.

Submitted by Miss A Burt – Deadline to sign up by: 11 March 2009
http://petitions.number10.gov.uk/Anti-Abortion/