For anyone wondering where the new background picture was taken it is from an LMS training conference at Ushaw and is one of the two chapels on either side of the door into St Cuthbert`s chapel. Those conferences were wonderful and I often wish we could have something similar without the need for training but just a residential conference on the Extraordinary Form such as happens elsewhere.

While on the theme of redundant seminaries I was interested to read on the Eponymous Flower blog about the attempt by the Institute of Christ the King to buy an ex-seminary in Sardinia. I`ve only been to Gricigliano once and that was way back in 1992. It was beautiful but rather small. I understand there is an extension and new chapel but that they are looking for extra space is all to the good. As usual there is some local clerical opposition.This seminary closed in 1976 so maybe things will work out well for Ushaw in another forty years or so when the FSSP or another buy it!

A Google search on `Cuglieri seminario` brings up this webpage with two pictures of which this is the better. I think this is the right place as the article talks about the seminary closing in the 70`s and now belonging to the state. 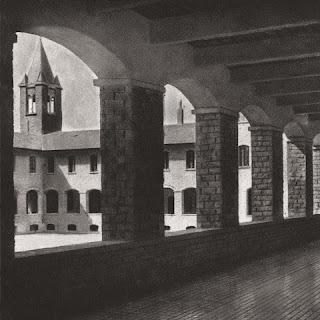 The story first appeared on MessainLatino.
Posted by Fr Michael Brown at 4:54 pm

I also read the post at Eponymous Flower. If I understand correctly,
although there is now a delay that there is still a chance that they will acquire it. I pray they will.
Your background is beautiful.