Pilgrimage to Lyon and Ars 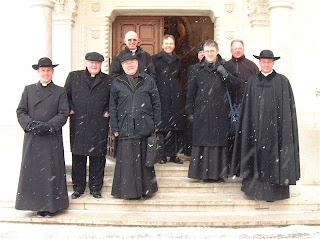 On Monday I set out for Stanstead to meet the rest of the party of priests heading out to Lyon for a pilgrimage under the direction of Fr de Malleray of the FSSP. After an epic journey from Lyon airport which took three hours using a bus, tram, underground and (very crowded) bus again we reached our base: the FSSP house at Francheville on the outskirts of the city. This house also accomodates a small primary school and when we arrived workmen were still busy on the refurbishing of the house. It is dedicated to St Padre Pio and has a rather nice stained glass window in the chapel dedicated to him. On the hill behind the house is a seminary of the diocese of Lyon which is now up for sale. 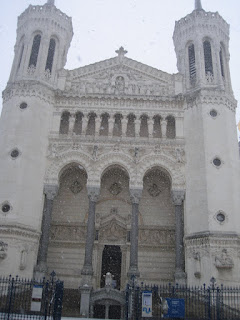 On Tuesday morning we woke to find it was snowing: it continued to snow most of the day. I had hoped to leave the snow behind in England!  Our programme began with a visit to the Gallo-Roman museum which was quite spectacular. There was a special exhibition on Roman burial rites which was very well done. After this we made for the basilica of Notre-Dame de Fourvière, which has one of the most breath-taking interiors I have ever seen. After a bouchon lunch we headed off to see the church of St Georges where the FSSP had their original apostolate in Lyon, the cathedral of St John the Baptist and the church of St Nizier which was built on the site of the first Christian place of worship in the where Mass was celebrated from 150AD.
On Wednesday we had a day of silent retreat in the house. Fr de Malleray gave us four conferences on the priestly life and we had readings at meals from St Pius X`s exhortation on the priestly life Haerent animo. Fr de Malleray recommend to us Bl. Columba Marmion`s Christ the Ideal of the Priest as the best book he has read on the priesthood. I have had a copy for many years and intend to read it in this Year of the Priesthood. Father`s talks were both practical and challenging and gave me at least, much food for thought. 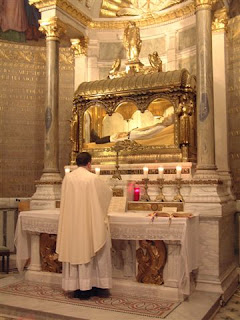 On Thursday we headed of to Ars for the day. I`m delighted to report that not only was there no problem arranging for our group to celebrate the EF in the church at Ars but the sacristy even provided altar cards and missals. As we entered the church I could hear a Missa Cantata being celebrated on the altar above which the body of the saint is on display. This was being celebrated by a priest of a new group, the Missionaries of Divine Mercy from Toulon,  which seem to be modelled on the White Fathers. There were a number of priests of the group with a large group of faithful. I`d never been to Ars before and hadn`t realised that while the nave of the original parish church has been preserved the sanctuary has been removed and replaced with a much larger, elaborate one which included the shrine of the saint on the right hand side. This shrine is not visible from the old nave. In the sacristy the first four of our group prepared to celebrate their Masses. I was lucky to be allotted the altar with the relic of St John Vianney. Once I left the sacristy and entered the new part of the church I caught sight of the altar for the first time and found it a most moving experience to see his body above the altar. There is not a lot to see in Ars but we made a visit to the presbytery where the saint lived. Later in the day the archbishop of New York and a group of his priests celebrated Mass at the altar of the saint. I looked through the book in the sacristy where priests who have said Mass sign and saw there had been a group of priests from Hexham and Newcastle there a fortnight before our visit and also a pilgrimage of priests from Nottingham diocese with their bishop had been in January.
And so on Friday afternoon we left Lyon ( and the snow) to return to England. I am so glad to have had the opportunity to visit Ars in the Year of the Priest and seek the intercession of St John Vianney, the patron saint of parish priests. Many thanks to Fr de Malleray for organising it and making it possible. 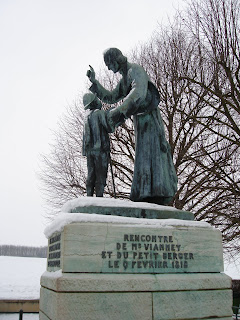 Posted by Fr Michael Brown at 9:40 am

Very interesting post, thank you Father. How was the journey to Ars? Can you recommend a good way to travel for one not permitted to fly?

St. Mary's could do with an altar like that?

A FAR superior way to travel.

Fr Brown, one of the highlights of my life was serving Mass at that very altar in 1962. I really wanted to see the bed that the Devil set fire to, and the pan with the remnants of the blackened potatoes, but no luck!

A most inspiring place.

1569, we saw the bed but didn`t notice the pan with potatoes. Or maybe we did: after 150 years it would be hard to identify them as such.

Malcolm, St Mary`s could do with a fixed altar of some description rather than our unfixed table.

I was taken by the picture of the priests. So refreshing to see a group of priests dressed very much like priests, and smiling to boot. It is not a scene that would be seen much in the UK but I am sure you were well received by the locals. It would be a start if our bishops ordered their priests to wear the cassock in their churches and parish grounds.

Leo D - dont be so stuffy. Don't you realise that open neck pink shirts are perfectly acceptable if worn by the Diocesan Education Chairman, Fr. S... H..., when being photographed with the Bishop at a formal event. See this month's Northern Cross.

Leo, you and I had better emigrate now that The Tablet feels that Harriet Harpie is a good partner for the Catholic Church in driving forward an "Equality" agenda.

I liked the cassocks too but Father, why have you not got a hat like that?

It sounds fantastic. I remember seeing a memorial to le Cure d'Ars in a cathedral but I can't remember where. Maybe Limoges but maybe not. Anyway...I seem to remember something about a burning bed and potatoes. What was it though?
Also, what is the date on that statue! 9th February what? I'm afraid I can't read it.

M.Le Cure waged a one man campaign against the scandelous, lascivious and corrupting habit of dancing, which he discovered when he went to Ars. For his pains, the Devil set fire, on several occasions, to his bed. That is what happens when you tackle the devil's work inherent in dancing! Warning to any priest today who allows such devilish behaviour in his parish.

He was in the habit of boiling a big pan of potatoes at the start of each week, enough to last 7 days, and that was his only solid food. He used to cut off the black bits towards the end of the week.
A fine example for today's parish clergy to follow. Of course, Fr Brown eats little else.

The date of the meeting between M.Le Cure and the little shepherd seems to be 1810, but since my copy of "Portrait of a Parish Priest" is missing, maybe burnt by the devil, I cannot be of further assistance.

St John was appointed PP of Ars in 1818, and he got lost walking to the village. He met a little shepherd boy who gave him directions. St John replied -

"You have shown me the way to Ars, I will show you the way to Heaven."

Similar to those of us making our way to Forest Hall for the first time.

Can we please stop blogging about those **** potatoes? Anyhow, the ones he boiled in the winter probably wouldn't turn black in a week; just occassionally during a hot summer.
I read somewhere that if a penitent refused to give up dancing the Cure would refuse absolution. How did he have the authority to do that? Maybe now it might be clear why I am 'ScepticalBeliever'? (1569, I know your views on dancing but did you never dance with the Barry Sisters back in the 60s? I did!)

I assume that the Barry Sisters were some exotic order of nuns who practised an early form of Liturgical dance. I was incarcerated in Ushaw in the 60's, and missed most of the fun, so excuse my ignorance - you obviously had a wild time.

Yes, 1569, and before the 60s, too! The Barry Sisters actually sang as a group (like the Beverley Sisters); my dance with them was at the Milvain Club at a party. The things nuns got up to!

I agree with Mad Hatter you should get one of those hats Father - it'd certainly cause a stir in tescos!

It would also cause a stir in Forest Hall; can these posts be construed as a petition saying 'Father, get yourself a hat' if so, consider me signed up.

Yet more nuns. the Beverley Sisters, you will be telling us next that the Little Sisters used to "perform" at the Milvain Club. Isnt that now a Hindu or Sikh Temple?

But I understand Father only eats potatoes, so he wont need to go to Tescos very often. I do agree though, the wide brimmed hat would be very fetching.

Father, Blessed Mary McKillop, soon to be canonised, had several run ins with Bishops in Australia, one even excommunicated her for disobedience. Hope for you yet!

1569 my old friend: no, there is no record of the Little Sisters performing at the Milvain Club and I certainly do not recall it happening.

Dear Father, we even got a mention on our Diocesan Web site:
www.cliftondiocese.com/from-clifton-to-ars

And I do recommend the hat!

I`m not sure about the hat. I have a bad track record with them: I always lose them.

Delighted you found your way to Forest Murmurs Fr Rowe. I don`t think I ever mentioned it while we were away. I impressed that you got an article about our trip on your diocesan website. But then just about everyone in Clifton seems to be celebrating the Extraordinary Form!

I was telling my wife about your trip, but she thought it was to St James of Compostella! Doesn't know her Ars from her Bilbao!

Anonymous, explain to your wife that Bilbao has a football team but Ars does not appear to have one. The Cure would probably (and quite rightly) have said (and probably did say) that playing football was a sin and he would withhold absolution if the penitent continued playing.

1569 rising mentions how to get to Ars with a 'local service from Lyon to Ars.' However I must point out for anyone wishing to visit that there is no train from Lyon to Ars itself today. The local train - the TER - runs from Lyon to Villefranche-sur-Saone and then it is necessary to take a taxi to the village of Ars.