Meeting of the Northern Tribunals 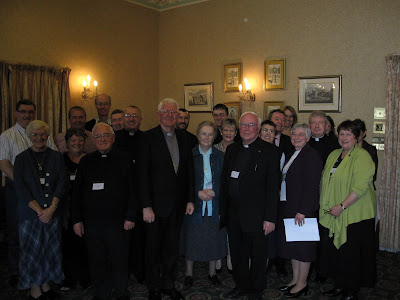 Last week I went to Windermere for the annual meeting of the northern tribunals. It`s a while since I`ve been to one of these but it was a pleasant experience and good to meet others working in tribunals of the Church. I have borrowed the group photo taken by the bishop of Lancaster`s secretary which appears on the bishop`s blog.

In the morning, after the bishop of Lancaster had welcomed us, Mgr John Conneelly of the Westminster tribunal gave us a paper on the nature of marriage in the Orthodox Church and how this may have relevance for our work. I had sometimes wondered that since we say the Orthodox have valid sacraments, how do we cope with their discipline which allows a second or third marriage? If an Orthodox is in a second or third marriage, which is valid according to their law, do we accept that marriage if it becomes an issue in Catholic life? The answer is no we don`t: they would need a declaration of nullity from a Catholic tribunal for their first (and second) marriage.

In the afternoon Fr Brian Murphy, the Judicial Vicar of Liverpool, gave us some food for thought on how we may make the work of the Liverpool appeal tribunal easier by having a more uniform procedure throughout the Northern Province.

Next year we meet in Newcastle.
Posted by Fr Michael Brown at 11:34 am

Interesting about not recognising Orthodox marriages.

Orthodox do not accept the validity of RC marriages and someone converting to Orthodoxy who has been married in the RCC is free to marry another Orthodox.

Of course, ultimately, Orthodox do not believe sacraments can exist outside of the Church and so, from their perspective, regard both RC and Protestant sacraments as equally invalid.

they[THE Orthodox] would need a declaration of nullity from a Catholic tribunal for their first (and second) marriage.

Oh, no probs then.

Do the Orthodox have a fixed teaching about abortion, artificial contraception, stem cell research, invitero fertilisation or does it vary from bishop to bishop?

Father,
Would I fulfill my obligation if I attended a Russian Orthodox Mass?

I`m no expert on anything Orthodox. Clearly we disagree about the validity of sacraments outside the church.

I don`t know what they teach on contraception, abortion etc. but I`d be suprised if they differ from us.

According to the 1967 Ecumenical directory, a Catholic who, for good reasons, occasionally attends the Orthodox Sunday Mass did fulfil his obligation. However the 1993 Ecumenical Directory does not mention this and so this privilege is presumed to have been revoked.