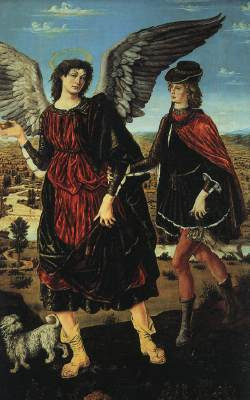 I`m surprised that no-one seems to have picked up on the suggestion from the Catholic Enquiry Office that those looking for a patron saint of romance should forget St Valentine and instead invoke the angel, St Raphael. The story featured on the BBC news website yesterday. Certainly there is far more comic potential with Raphael.

For those who may have forgotten the story as it occurs in the book of Tobit, Tobias is led to Sarah by the archangel Raphael. Sarah has been married seven times before but all her previous husbands died on the wedding night, killed by the devil Asmodeus. Sarah makes her prayer to God and so God sends Raphael who brings Tobias along. They marry and Raphael deals with Asmodeus so the couple live happily ever after.

One website has this to say about the book of Tobit:

The message of the book is that God is both just and free. Suffering is not a punishment but a test. God in the long run does reward the just and punish the wicked. The believer is called upon to trust God and live his way. The book is rich in principle, and presents the value of prayer in our daily lives, angelic intercession, reward of good works, parental respect, and the importance of prayer, fasting, and especially almsgiving in expiation of sin (12:9).
I think the Catholic Enquiry office may have a point especially as Valentine has been removed from the calendar of the Ordinary Form and hangs on by the skin of his teeth as a commemoration in the Extraordinary Form in its 1962 incarnation.
However it does seem odd to me that in an age when the Church talks about inculturation that it has chosen to ignore Valentine`s Day, a major secular event, but based on a Christian saint and chooses instead to celebrate as a feast, in Europe at least, those two worthy gentleman Cyril and Methodius.
Posted by Fr Michael Brown at 5:00 pm

I will hedge my bets and pray to both.

Perhaps Raphael isn't getting picked up (no pun intended) because people think angels are a bit new-agey?

I like the idea of Raphael as the patron of romance, but I doubt the smoking fish guts (that's in Tobit, right?) will catch on!

The elevation of all those patrons of Europe to the rank of Feast surely counts as one of the least felicitous of John Paul the Great's liturgical interventions. It is very odd in July when St Bridget of Sweden (Feast) outranks St Mary Magdalene (Memorial).

As the old nun in the Brother Choleric cartoon says, 'And the thirty-seventh thing I'd do if I were Pope ...'

Stick to the old calendar.

A commemoration is better than nothing.

November 30 will see the 460th anniversary of that great day when the forces of the Earl of Northumberland and the Earl of Westmorland met in Durham Cathedral to formally renounce the Reformation. In the presence of a packed crowd, including the majority of the Cathedral clergy - the Protestant Bishop Pilkington had fled south - Frs Peirson and Plumtree, during the course of a High Mass, formally reconciled the people of the Bishoprick to Rome. Happy day, pity it din't last!
exackli